The best thing about beer is the beer! 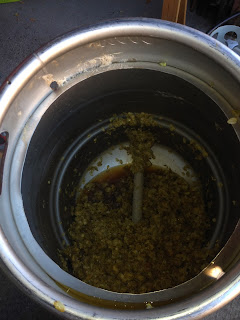 The best thing about beer is beer! A wise man once said that, actually scratch that. I just made that up. Sounds like drunken inspiration. Let me explain myself.... By the way this photo is of my brew kettle where I added almost a pound of whole leaf hops that went into an IPA last week. They were heirloom hops I got from a guy who got the rhizomes from a broken down homestead in Ovando, MT. It hadn't been kept up for 80 years. I'm making a single hop IPA with them to try out a different malt bill than the IPA recipe I have been working on. They smell piney, spicy, and very citrusy, with a touch of skunky/dank/cattiness. So back to my tangent...

The path I am on, I did not necessarily plan. When we started this endeavor we thought about the business side of things through and through, researched for over a year, went to some schooling, wrote the business plan, put it in front of advisers, talked to brewers, talked to people in the industry and I had no idea the craft beer industry was so cool.

The craft beer industry is all about having fun. Little did I know that when I started. I thought it was all business, just kinda sudsy. The business is welcoming, warm, respectful, crazy, off-the-wall, and especially accommodating to say the least, and fun. I have talked with close to a dozen different breweries or the employees/ brewers/ staff and they all are super excited for us, helped us in different ways with information, and have been super accommodating. Truly cool.

The other thing that is interesting is how passionate the people in the craft beer industry are about beer. They love to talk about it. They love to make it, they love to taste it, look at the color, look at the bubbles, smell it, swish it in their mouths and swallow the last drop while pining for more.

Right now, I fancy myself as a traveling salesman with a suitcase of beer. I show up to talk to potential investors with cooler in hand, crack a beer and talk about beer. Whether the presentation is 9 am or 8 pm, it's never too early or late to talk about beer. 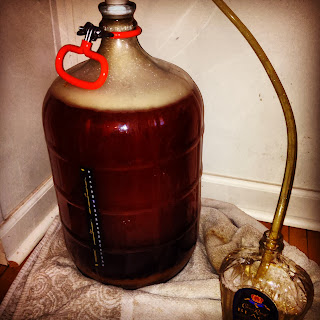 Here is a Bier-de-Garde (French Farmhouse Ale) that some might have tasted before. It's a repeat offender on my brew list. I would also say, I think it is hands down LaNette's favorite recipe that we've made so far. LaNette, if you don't know, is the brains of Katabatic, some say the real boss and my wife. She'll be doing the books, brews beer herself and she has a great palate. I might even be convinced it's better than my own. I'm no slouch though.

The closer we get to opening, the more I love my new reality. I just really love beer. Making beer to test recipes, or certain hops, or malt bills, ah man, that is tough. Seems like every week I have to break out a new beer to try. If it isn't mine, it's one that I buy. I haven't had that one before, hmm, I think I'll try it.

At Katabatic, that's what we're about. We are going to have 4 to 5 standards with 4 to 6 rotating handles after we get up and running so you can have the old standby's or try something new, something maybe a little unique.

Posted by Katabatic at 9:42 PM